Kylee takes advantage of her ass to humiliate

With her awesome ass, Kylee knows she can do whatever she wants because guys dig her ass. She likes to watch out for guys who are enchanted by her ass and she takes advantage of them. This guy did and she seduced him and took him to her house where she unleashed terror on him. She made him her bitch by facesitting on him and making him smell her ass.

Jasmine and Mia had argued for hours on end about who the stronger one was between them. When they could not agree, they decided to settle it once and for all. They had a wrestling match. They each gave it their all but it was not enough for Jasmine and Mia overpowered her and threw her on the ground. She then climbed on top of her and used her ass to trample her face.

Lady Milena gets her soles licked

There is nothing that inflicts pain more than a sharp object. This mistress knows that and she wanted to make sure she used a sharp object to humiliate and torture her slave. She decided to use her high heels. She told her slave to lie down and she stood on top of his stomach and chest with her high heels. He cried out but she did not care. She went on.

Mistresses Jordan and Presley were busy watching shopping for shoes online but they had to punish their slave. They did not want to leave one for the other. So they started their online shopping spree and made the slave get under the table and lick their smelly feet and their shoes. They made him smell them too even though they knew that their feet were both sweaty and smelly.

Madame Marissa is one cruel mistress. She enjoys the suffering of her slaves and does not care what she does to them or how they feel. She wanted to try a different punishment for her slave and made him lie down without his shirt on. She then trampled him with her heels and even made the poor slave lick the heel and her soles. He had no option but to do as told.

Julie and Gia were not happy with Bambina for leaking out their secret. They had to show her that it was not ok to do what she did. So they hatched a plan. They waited till she was in the bedroom resting. They went there and trampled her with their asses and made her smell their butts. They humiliated and trampled her till she promised never to repeat the mistake.

Mistresses humiliate guy in the woods

Morgana and Hannah love having fun. But sometimes, they like to have fun at the expense of other people. While walking in the woods, they met this guy who was trying to have some quiet time. They did not let him be. They started to humiliate him and forced him to lick their high heel boots while they were trampling him with the same boots. The poor guy had no option but to cooperate with them. 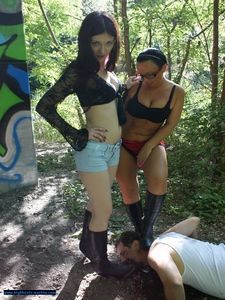 If you love the outdoors like this mistress does, you are bound to get your feet or your shoes dirty. This mistress came home with her high heel boots dirty and she wanted them cleaned because she was going somewhere in them. She did not want to remove them while they were being cleaned so she made her slave lick her heels till they were clean using only his tongue.