Mistress Melina and mistress Sabrina are new to slave humiliation. But they are so psyched for it that you cannot easily tell that they are amateurs. They flirted with a guy and promised to make his wild fantasies come true if he did what they wanted. The poor guy agreed and went ahead to lick their high heels and do all the crazy things they wanted but they did not reciprocate.

Madame Marissa wanted to send a message to a group of guys that was at loggerheads with her crew. She wanted to show them that she would not hesitate to do anything to humiliate them if they did not stop bothering her crew. She hunted down the leader of their pack and degraded him by making him lick the soles of her high heels and posting the video to their group.

This guy was in deep shit. He had bullied and messed with these mistresses' sister. They could not let him go scot-free. So they hunted him down and when they had their chance, they pounced. They tortured him by kicking him hard in the balls, kicking him all over, trampling him and making sure he was in lots and lots of pain before they let him go and told him to stop being a bully or they would do worse.

Gillian came home specifically with muddy boots because she wanted to humiliate and punish her boyfriend. He head wronged her and wanted her to forgive him. She had not yet forgiven him and he was desperate. She knew he would do anything so she made him lick her muddy boots before posting the video online and making fun of him. After that, she found it in her to forgive him.

This mistress is mean and sadistic. She likes to humiliate and degrade people she feels are beneath her. She lured this guy to her house and she made him lick the soles of her dirty boots clean. She smiled while the guy was clearly humiliated and degraded. She told him how worthless he was and why she would make him lick her ass and eat her shit if she wanted. 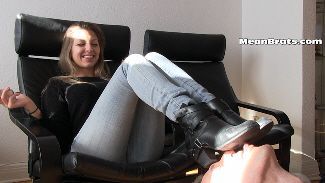 These kinky mistresses like to have fun at other people's expense. They do not care because they believe that losers are beneath them. They like to party and every once in a while they like to get a slave and make him or her do all the nasty and disgusting things they want. They made this slave lick their spit from the toilet. They even made him drink toilet water.

This Sexy Mistress shows this Loser Slave he dosn't stop loving anything about her as she gives herself a pedicure while he is sitting right under her feet watching her every step. Cutting her toenails, Filing her feet. With his mouth open of course. No way else to have been this Foot slave is nothing but a looser. So everyone will know she will leave nail polish on his face!.

This young Mistress shows her Foot Slave that he has to clean her sweaty feet for the first time after a long day at work. nasty stinky smelly feet as she tapes him under the chair so he can't move the only thing he can do is smell. She slids off her socks and she runs his nose between her toes so he gets the full effect of her Feet.

Mistress Marissa is feeding her slave

Mistress Marissa has a special Surprise for her little Slave. Walking in in her bare feet as she puts her full weight on his hips she sticks a funnel in his mouth as she spits his surprise into his throat. of course he isn't going to just have one bit. He has to eat every last drop as she chews it up just for him every time and spits it right back out.

Mistress and her foot Slave

Mistress likes to sit back and watch her foot worshiping slave lick clean her feet. No matter what she steps in he is going to clean up her High Heel. She is spitting on the floor he licks it up off the floor like a little dog worshiping her feet and her saliva. worshiping her feet like a good little slave boy. She looks a little bored with him to say the least.